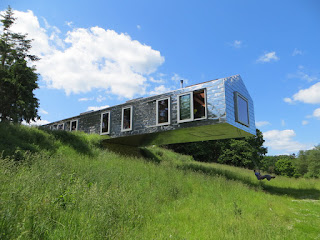 Like a scintillating spacecraft that has touched down in Constable Country, MVRDV's Balancing Barn is the perfect rural retreat for jaded metropolitans

Distinctive buildings are rarely a compromise; they stand out because it is accepted that a price must be paid for being different. The Balancing Barn, built for Living Architecture by Dutch practice MVRDV, is a good example. Their decision to create a single-storey linear holiday home that cantilevers daringly over an escarpment turns the building into a giant truss, whose diagonal struts crash across many of the windows. A  large glass panel in the living room floor  draws attention to the disconcerting structural arrangement. The layout is tailored for short stays rather than permanent habitation. Two doors lead into the generous kitchen and dining space, which has wide sliding glazed doors on each side. From here a side corridor runs about 20m, past four bedrooms, each with en-suite bathrooms, to the living room.

Wrapped in gleaming stainless steel, at the end of a tree-lined gravel drive retained from a previous house on the site, the Balancing Barn appears like a surreal cabin. Enigmatically oscillating between readings as a solid volume and reflective surface, the building both emerges from and merges with its leafy context, poised between integration with and detachment from nature.

Most of the structural heavy lifting is done behind the external skin: this is a building that pulls out all the stops to achieve instant 'look-no-hands' visual impact. The form of the structural braces is exposed in the corridor and living room, although the steel is wrapped in timber panelling, which also lines the walls and ceilings. In the bedrooms the structure is mainly concealed, within thickened wall and ceiling zones.

The ’otherness’ of the Balancing Barn is further emphasised by its relationship with the ground: a bold shadow gap at its base and galvanised mesh ramps at all door thresholds suggest detachment. A hinge detail where the ramp frames connect to the building implies that they could be pulled up to form defensive shields.

Is all this transgression worth the effort? Suppose that the cantilever was replaced by a column? Yes, this might allow the diagonal braces to be removed from the window openings, making it possible to enjoy standing just inside their threshold, but it would also undoubtedly dilute the architectural idea of release from the ground. Even the braces have a positive aspect: of reinforcing a sense of enclosure and protection from the outside world. At the entrance, in the kitchen dining space and in the end wall of the living room, generous unrestricted windows, are made special by contrast with the layered construction of the braced windows. A few days in the Balancing Barn, a building poised between dream and reality, allow an escape from the humdrum. 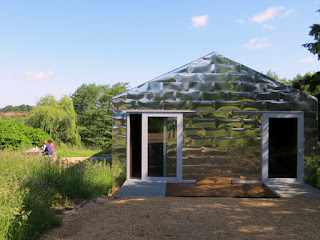 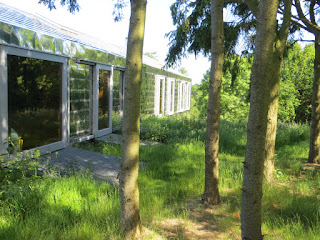 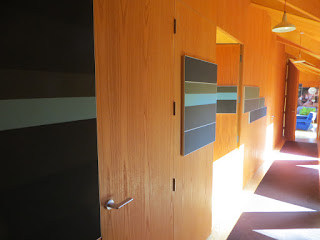 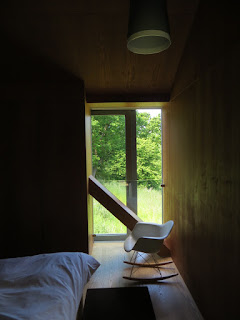 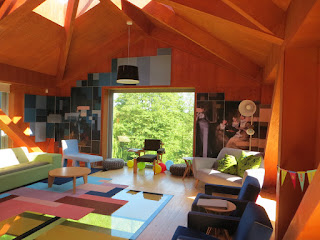 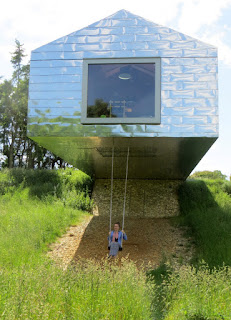 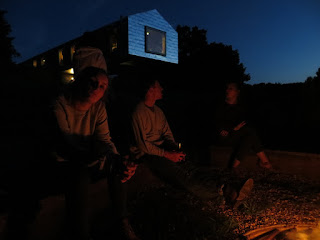 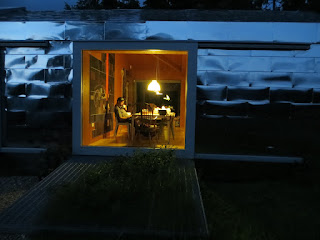 Posted by Simon McCormack at 13:20 No comments: