The Mushrooms of Seville

This amoeboid timber megastructure not only provides shade, but accommodates a museum, market, raised plaza, an aerial function suite and viewing decks.  It also neatly preserves extensive archaeological remains discovered on the site. Architect Jürgen Mayer-Hermann’s design is an audacious attempt to reconcile these complex functions within an iconic structure, but how successfully does this intervention integrate with the social activity of the city?

In Mediterranean countries a communal evening stroll, or paseo, is one of the pleasurable institutions of urban life:  meeting friends and acquaintances, seeing and being seen.  During the great age of engineering, Eiffel, Tatlin and Ferris invented fabulous structures that would be prominent on the city skyline and from which the city itself could be observed, allowing the individual to experience a sense of location, or belonging, within the city as a whole.  Often built with the intention to provide an iconic emblem for world expositions or other great events, these gravity-defying structures introduced the frisson of the funpfair to our cities.  The success of Marks BarfieldArchitects and engineer Arup/Jane Wernick’s ‘London Eye’ is testament to the enduring popularity of these mechanisms.

The Metropol Parasol in Seville, popularly known as Las Setas or The Mushrooms, might be judged by the same criteria, as one of these engineering marvels, but it also fulfils a complex programme.  It is situated in a large, previously somewhat nondescript, square in Seville.  In 1990 excavations for an underground car park in the square revealed extensive archaeological remains from the Roman and Andalusian eras.  Work stopped, and in 2004 an architectural competition was held to find a way of proceeding with development without compromising the archaeology.   Jürgen Mayer-Hermann’s winning competition scheme is ingenious:   the remains are permanently displayed in a below ground ‘Antiquarium’, there is a market at street level and a wide flight of steps and an escalator provide access to a paved terrace above this.  The most inventive part of his solution is the creation of the ‘parasol’, comprising an organically shaped timber grid structure at roof level, supported on six massive ‘tree trunks’ of steel and concrete.  This extraordinary undulating roof supports walkways, a bar and a large function room, all with stunning views across the city.  Below street level the ‘tree trunks’ become ‘X’ –shaped columns sitting in less sensitive areas of the excavations.

The structure appears at its most elegant from a distance.  Seen from the narrow side streets, the Parasol appears like a surreal cloud. A soft light filters through the timber coffers, which shade the square below from the sun.  Above the canopy there is a wonderful sense of novelty, as the walkway swoops like a roller coaster at the level of the surrounding rooftops.  Seen from close quarters the structure is crudely detailed.  It is disconcertingly apparent that some of the timber coffers are not structural, but steel trusses clad in a thin layer of timber.  Evidently the structural capacity of timber is not equal to the daring gymnastics of the roof form.

For a building with public access to every level, it appears curiously unpopulated when seen from the street.  Views of people and activity on the raised plaza are largely cut off by sightlines from street level, making it a less attractive destination.  The lift and stairs to the roof canopy are concealed inside the massive columns and can only be reached via the basement museum level, where a ticket must be purchased.  People on the decks of the roof are also not generally visible from the ground.  This also breaks a rule of heroic structures like the London Eye, or Eiffel Tower, but also of the funfair, where those on the ground and those in the air remain in sight of each other.

This is a project which attempts to reconcile conflicting requirements and operates for the benefits the local community.  A triumph of imagination, the Parasol defies definition by conventional criteria.  Although the concept of ‘iconic’ projects is one that has lost credibility in recent years, the Metropol Parasol definitely adds an edge to this quarter of Seville. 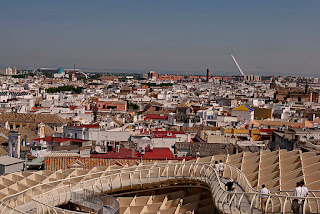 Posted by Simon McCormack at 03:14 No comments: