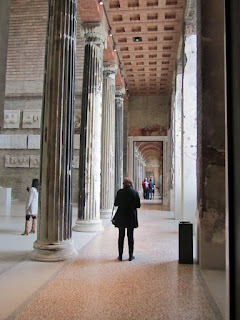 Antiquities of astonishing beauty and quality in the Neues Museum are greatly enhanced by the magnificent setting.  Rescued from dereliction following Second World War bombing and the division of the city, the museum has been sensitively repaired and reconstructed by David Chipperfield Architects and Julian Harrap.  However this is no facelift, erasing the vicissitudes of time, turning the clock back to some real or imagined earlier incarnation, it has been painstakingly repaired, leaving the scars of the 20th century exposed in a rich palimpsest of layered construction.  Like the very best art and architecture, the physical reality of the building transcends any representation in photos.

New materials include white terrazzo and concrete, with marble aggregate, bronze, oak (which is generally dark stained), mushroom coloured leather and sand blasted glass.  Carefully assembled pre-cast concrete elements are finished in a variety of textures, creating a subtle tactile range.  The new work, somehow both raw and refined in its tectonic quality, perfectly complements the surviving construction, which is a mixture of fragmented decorative surfaces and exposed underlying construction.  This is an expensive building: the insides of the cloakroom lockers are lined with luxurious dark stained oak and the doors wrapped in leather.  However, it is rigour of conception, rather than opulence, that underlies Chipperfield’s approach: for example, displays on the upper galleries are formed in unlipped blockboard, with integral display windows and directly applied graphics.  An unforced variety in the character and treatment of spaces and displays makes this the least stuffy of museums.

New elements of construction and even the display cases are engaging reinterpretations of the originals.  Unlike the artifacts, which are presented in glorious isolation on plinths and in cases as the aesthetic pinnacle of past civilizations, the building is a sublime manifestation of the cyclical processes of human endeavour through time:  creation, decay, destruction, repair, re-interpretation and renewal. 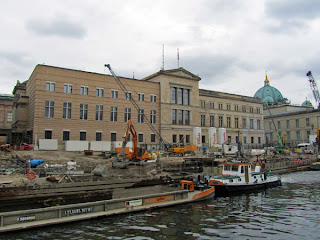 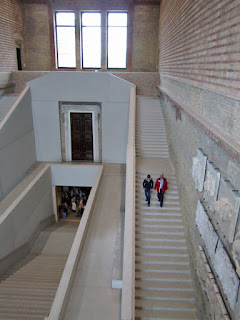 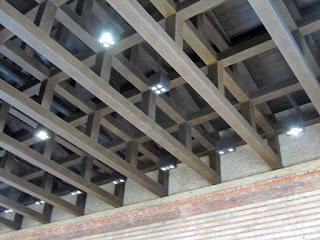 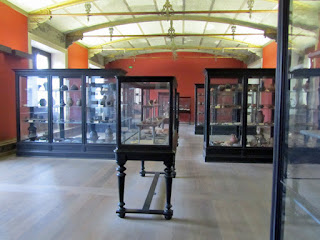 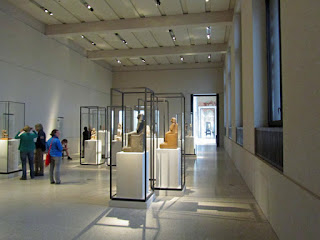 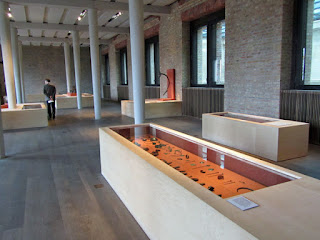 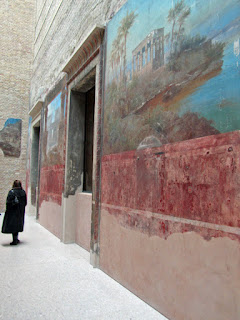 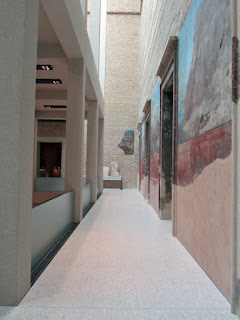 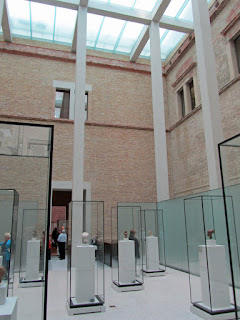 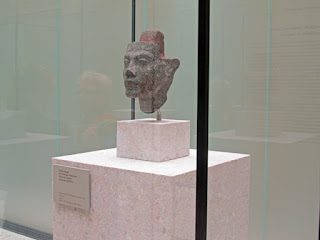 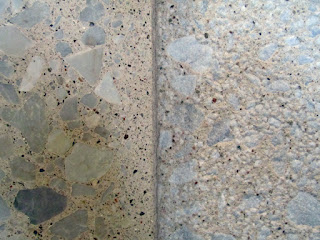 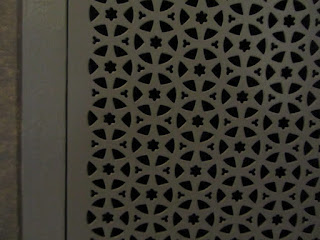 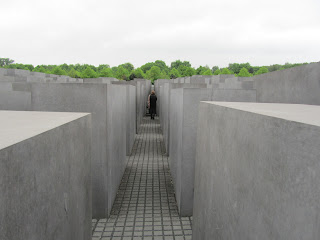 Tourist buses line one edge of a Berlin square which is laid out with 2711 grey concrete blocks forming a dense grid.  One block makes a convenient plinth for a pretty girl to sit posing while her boyfriend takes a photo.  Children quickly discover that it is possible to hop from one block to another.  For although Peter Eisenmann’s Memorial to the Murdered Jews of Europe, or Holocaust Memorial, resembles a vast and ancient burial ground, it is also connected with the city, forming a backdrop to everyday life.
Away from the perimeter of the square the blocks are taller and the ground dips into hollows, so that as you penetrate deeper you are hemmed in, screened from others in a way that is both mildly disorientating and claustrophobic. There is a sense of being swallowed up, of Alice-like being diminished in size.  Occasionally, figures flit across an alley ahead of you.  These brief encounters both reinforce the vivid experience of isolation and temper it with a hint of playfulness.
The brilliance of this sombre memorial lies in the way in which it overlaps with the city, inviting participation, drawing us in, briefly detaching us from the everyday and prompting a moment’s reflection. 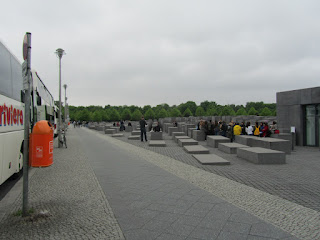 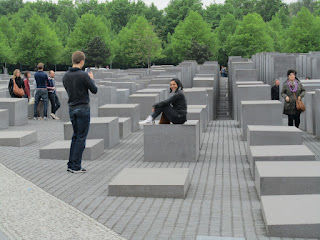 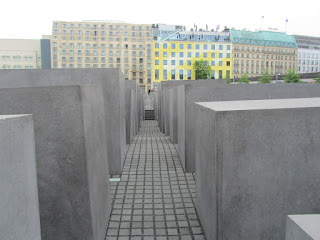 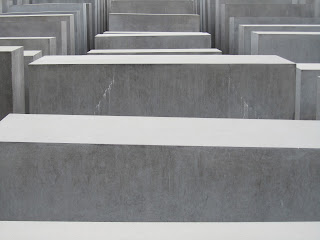 The architecture of the Wales Millennium Centre is ebullient, although, like any nationalist brand, prone to sentimentality.  Outside there is the overblown rhetoric of the verse super-graphic, in Welsh and English, with cladding formed from strips of dry stone walling in different coloured Welsh slates, while inside stairs and balconies are clad in timber bands from native species and haphazardly located black columns terminate in ornamental lanterns.  It is a relief not to find a Welsh dragon!  Although it is easy to take issue with the romantic approach, this should not be allowed to detract from the signal achievements of the building.

The brief is complex, including  an auditorium suitable for opera that can also be used for touring musicals and other shows, two smaller performance spaces, but also administrative and rehearsal bases for Welsh National Opera, National Dance Company of Wales, BBC National Orchestra of Wales and several other youth and arts organizations.  Yet this building comfortably accommodates the colossal scale and complexity, presenting a comprehensible face to audiences as they arrive.

Facing the open space of Roald Dahl Plass, formed from an infilled dock, and located sideways on to the bay, the Millennium Centre sits well on the site, establishing a strong connection with both the city and the powerful topography of Cardiff Bay. Belonging to a later generation than the cultural buildings of London's South Bank, the Centre integrates the food outlets and informal performance spaces expected from a contemporary arts complex.  Cafes open onto both the foyer and public external space, while the stepped plan allows views out and sideways to the Bay, creating a frontage which is both permeable and animated.

Located with admirable directness, the main entrance for performances is under the cantilever of the larger auditorium.  Fussiness evident elsewhere is excised and the audience is greeted by an incredibly long straight steel counter for tickets and cloaks.  Interestingly, prior to performances programmes are sold from timber trolleys parked in front of the counter, obstructing the space and rendering the dominant counter redundant.

Technically accomplished, the auditorium has good sight-lines with an intimate relationship between audience and stage.  However, the pink faceted cladding, muddy carpet and strip timber detailing lack a coherent aesthetic character and are less successful than the exterior treatment.   For such a large building, the Centre has a surprisingly homespun quality:  are the pink, purple and grey chunky knit of the slate dry stone blocks and wany edged softwood cladding an invocation of the rural dimension of Welsh identity?  A strength of the building is the way in which your experience of the rich modelling and materials change as you move around it in different weathers and lights.  The cut out letters of the super-graphic are glazed, with words formed from different coloured glass; they allow views in and out, a sculpturally precise relief in the main foyer bar and a striking effect when the letters shine out at night.
As an assertion of power and identity, the application of writing on the building may be closer in character to ancient Roman, rather than Constructivist practice, but the glazing and illumination of the letters injects a populist note akin to the signage on a cinema.  The text cleverly interlocks Welsh and English verse: 'creating truth like glass from the furnace of inspiration' (in Welsh) 'in these stones horizons sing' (in English).  The Wales Millennium Centre is an accomplished building that is clearly enjoyed by a wide audience and well worth a visit, especially if Bryn Terfel is singing! 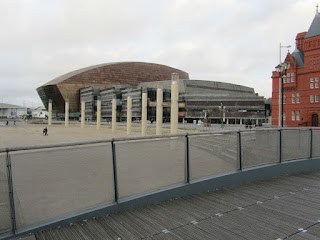 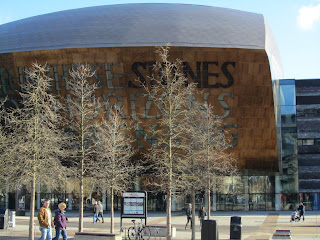 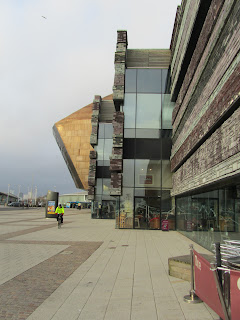 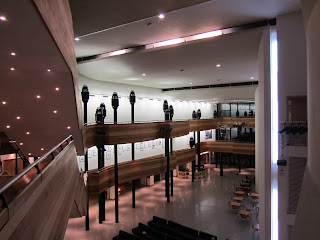 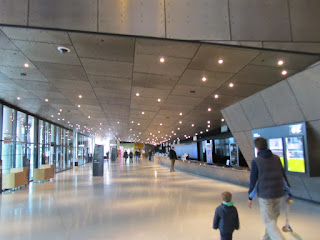 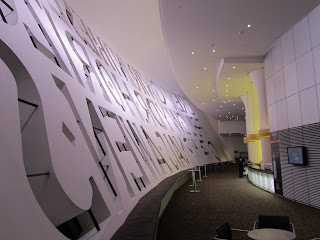 Posted by Simon McCormack at 13:49 No comments: