Reincarnation of the Butterfly 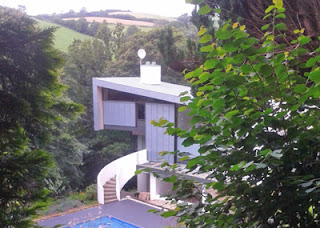 When the current owners bought this secluded 1960’s house they originally planned to repair it.  Later they decided to demolish and rebuild it, raising questions of authorship and highlighting how construction and patterns of domesticity have changed in half a century

Whilst on holiday in Devon this summer I stayed at Kaywana Hall, a house that Mervyn Seal built for himself and his family in 1962.  It is hidden in 6 acres of steeply sloped woodland at Kingswear, across the river from Dartmouth.  Over the years, as his family grew, Seal made alterations and added accommodation.  Around this time, during what must have been a golden period of his career, he designed a series of striking houses in Devon.  Typically they took the form of an elongated box with a ‘V’ profile roof expressed on the long elevation.  The floor stepped up from the ground in whole and half levels, lifting the house above the landscape and creating a dramatic interior space beneath the raking roof profile.  They were dubbed ‘butterfly houses’.  Seal cites the double-height living spaces of Le Corbusier’s Unite d’Habitation as an inspiration.  The roof and end walls were extended beyond the plane of the long facades to create an ‘M’ shape providing some solar shading and investing the construction with an abstract character.  Kaywana Hall projected dramatically above the slope of the site.  A steep hair-pin drive led up through trees to arrive at a carport under the house, with views across a swimming pool to the woods beyond.  The living space was at first floor level with heavily glazed elevations looking back to the approach and over the pool.  Three bedrooms were located at upper ground level.  At the opposite end of the house the second floor master bedroom was cantilevered into the tree-tops.  It must have come as a bitter blow when circumstances obliged Seal and his family to leave the house in 1992.

About 8 years ago Tony Pithers and Gordon Craig fell in love with the house and bought it, with the intention of repairing it.  Following the advice of local architect Stan Bolt they decided to demolish the building and rebuild, broadly following the original design.  This might at first seem a strange approach, particularly from a conservation viewpoint, where original construction is highly valued, but it enabled the building envelope to meet current environmental standards.  The approach also allowed some unfortunate later additions, such as the infilling of the spectacular carport, to be stripped away.  At a late stage in the design process the client decided to detach the secondary bedrooms from the house, enabling their use as luxury bed and breakfast accommodation, with guests eating breakfast in the dining space of the main house.

This new arrangement works well for the client and Bolt’s confident rebuild is arguably clearer conceptually than the original design.  The interior is certainly improved by a more open plan arrangement, something that would have been less practical in a house occupied by more people.  The use of materials and detailing is of a very high standard throughout.  Pre-patinated zinc is used to clad the roof and selected wall elements, while walls are in a white render.  Floors are finished in wide oak boards and the raking soffit of the house clad in a light stained softwood board.  The original chimney and cantilevered concrete platform of the master bedroom were retained, but the stone of the earlier construction has been suppressed in favour of white render.   Coloured glass panels and white framing to the glazing, which lent a painterly abstraction to the original surface of the facades, have been replaced with a  more neutral palette of dark timber and slim profile aluminium glazing, but the delightful open stair, with its fishbone steel structure, has been retained.  Each incarnation of this unusual and lovely butterfly is the product of a gifted architect, and the work of both deserves greater attention. 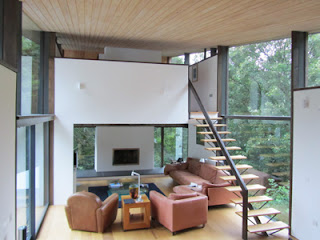 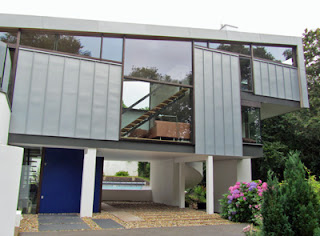 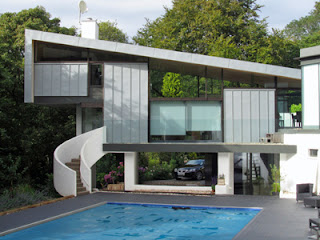 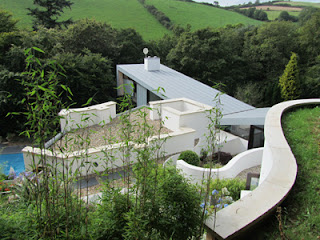 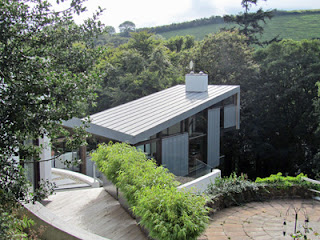 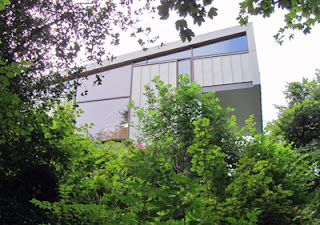 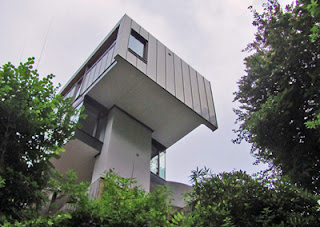 Posted by Simon McCormack at 23:05 No comments:

Why BD’s Carbuncle Cup is Mistaken 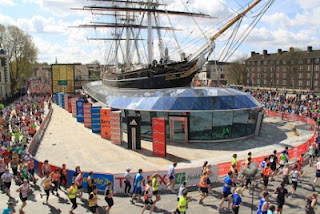 Building Design magazine’s Carbuncle Cup, an award for the worst UK building completed in the past year, singles out Grimshaw Architect’s Cutty Sark scheme as this year’s ‘winner’.  Whilst I agree with Ellis Woodman’s critique of the project, the Carbuncle Cup is misconceived because of the way in which it humiliates the recipient.  It adopts the emotive language of Prince Charles’s notorious criticism of  Ahrend Burton & Koralek’s National Gallery extension, which he likened to a ‘monstrous carbuncle on the face of a much loved and elegant friend’.

Perhaps amusing in private, or on the pages of Private Eye, this sort of labelling has no place in the serious architectural press and debases the currency of criticism.  It is wrong to single out one project and its author for vilification.  There are many bad buildings.  They are not only the result of poor judgement, more often they are also the outcome of conspiring circumstances:  pressure for over-development, the wrong brief, budget constraints and statutory restrictions.

The real scandal is not the occasional spectacularly misjudged attempt by architects to create something special, but the insidious mediocrity of much of what is built, mainly designed by people who are not architects.  This reflects an underlying problem:   a general lack of appreciation of good design and an unwillingness to pay for it.  The annual award of the Carbuncle Cup has become a blood sport and BD does itself a disservice by persisting with it.  The architectural press has an obligation to raise the debate and should take a hard look at what passes for criticism on its own pages.
Posted by Simon McCormack at 13:03 No comments: