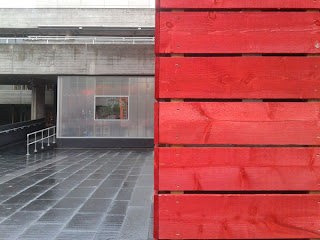 A red-stained timber box with distinctive corner ventilation towers, ‘The Shed’ is a temporary performance space by Hayworth Tompkins, clamped like a siege engine onto the front of the sober concrete terraces of the National Theatre.  It has its own ground level entrance, reached via a ramp carrying visitors across Lasdun’s defensive brick plinth.  Simply connected to the existing interior via a large window opening from which the glass has been removed, ply furniture and suspended red lamps establish a discrete identity for The Shed foyer on the periphery of the existing Lyttelton foyer.  Refreshingly, this jolly red carbuncle establishes a second theatre accessible from the ground level Lyttelton foyer, the de facto main foyer of the National Theatre.  The new performance space works very well, apart from rather narrow seats and poor acoustic separation, which allows the interval hubbub of the Lyttelton audience to infiltrate the space.

An architect may imagine many different configurations during the design of a project, but never know how these might affect the dynamic of a building, or how well they would have worked in practice.  Temporary buildings provide a welcome opportunity to test ideas without the burden of permanence.  At Stratford, Ian Ritchie Architects built a temporary theatre for the Royal Shakespeare Company, which was used to test the scale and sight-lines proposed in the permanent auditorium by Bennetts Associates.

Whilst working on the masterplan for the National Theatre at Stanton Williams in the early ‘90’s, I became aware of the shortcomings of a building which I greatly admired.  Although universally known as ‘The National Theatre’ or more often, simply ‘The National’, there are three auditoria: the Lyttelton, a traditional proscenium arrangement; the Cottesloe, a more intimate black box studio and the Olivier, inspired by the Greek theatre at Epidaurus.  Each theatre has an associated foyer.  The Cottesloe is completely separated, with its own entrance, while the foyers of the Olivier and Lyttelton auditoria are linked.  Although the Olivier is the largest auditorium, it is high up in the building and its grand foyer is generally quieter than that of the Lyttelton, which is more accessibly located at ground level, to one side of the main entrance.   There is an unresolved question at the National: is it one theatre with three auditoria or three theatres in one building?  The remote entrance to the Cottesloe and linkage of the spacious multi-level foyers of the Olivier and Lyttelton at ground level only, are almost guaranteed to induce panic or, at best confusion, in the first-time visitor or late arrival.

It seems that Lasdun conceived the Olivier foyer, with its elevated position and privileged views, as the centre of gravity of the publically accessible spaces in the building, but that this intended status was undermined by its remoteness form the main entrance.  The problem was compounded by the removal of the elevated walkway, which in theory allowed a neutral entry, midway between the Lyttelton and Olivier foyer levels (the ground level perimeter of the building was originally an access road).  With all entry now at ground level, most visitors enter the skewed main entrance, derived from the geometry of the Olivier above, but then veer off to the less generous Lyttelton foyer.  People are led through a building by what they can see: faced with a choice between grand stairs leading to an uncertain destination and a congenial space at ground level, most will tend to stay at ground level.  And this is where The Shed works extremely well, demonstrating the benefit of arranging public spaces so they are legible, even to the first-time visitor. 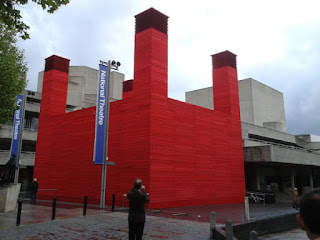 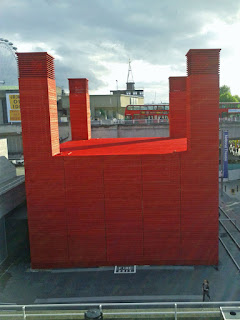 Posted by Simon McCormack at 12:33 No comments: