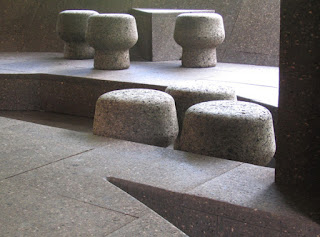 I visited this year’s Serpentine Gallery temporarypavilion in Kensington Gardens on a wet summer afternoon with high expectations.  Reviews had been glowing.  One critic wrote evocatively of descending into a space steeped in the Mediterranean aroma of the cork with which the installation is lined.  A beguiling photo was published showing the permanent gallery mirrored in an elliptical reflecting pool on the roof of the pavilion.

It was inevitable that the reunion of heavyweight iconoclasts Herzog & de Meuron and Ai Weiwei, responsible for the ‘Bird’s Nest’ stadium at the 2008 Beijing Olympic Games, would have a provocative outcome.  Typically, at the Serpentine they turned convention on its head, wishing to ’...sidestep the unavoidable problem of creating another object...’  Instead of opting for yet another virtuoso permutation of the temporary art pavilion, their conceit was to ‘excavate’ traces of previous years’ structures, creating an open-sided shelter for visitors to the park and a place for discussion.  They claim that their dig extended down to the water table, where they created a ‘well’ to ‘...incorporate an otherwise invisible aspect of reality in the park – the water under the ground...’  The cork was selected for its ‘...great haptic and olfactory qualities...’

Witty and elegant though this approach is, the physical reality falls short both of their rhetoric and the hyperbole of the press.  When I visited, the rich smell of cork had dissipated, the ‘well’ was dry and the elegant approach view of the reflecting pool was found to have been taken from a ladder.  Needless to say, when the site was excavated, no physical remains of the previous pavilions were found.  However, too literal a response to the pavilion surely misses the point:  it is at its most potent as an idea, an abstraction, a place of the imagination.  The idealized representation of architecture is a recurring phenomenon, from Palladio's I Quattro Libri to clumsily doctored photos of early modern projects, and not necessarily a bad thing.  Most people can only form opinions based on these second-hand manifestations, having never experienced the sometimes messy reality of buildings.  The perfected image is the stuff on which reputations are built.

Although well used by tourists sheltering from the weather with a cup of coffee, the interior of the pavilion has a gloomy, defensive, atmosphere, dug-in as if awaiting some unspecified threat to appear across the lawns.  But it also has something of the character of a children’s play den, a place of concealment from which to observe the world.  A security guard and large mobile cafe stand sentinel over this disconcerting project:  a sliver of flat water hovering above a dark undercroft, not quite architecture, not quite sculpture.  The value the Serpentine Pavilions lies precisely in the license that is given to experiment. 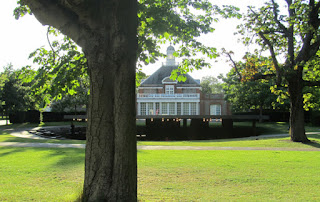 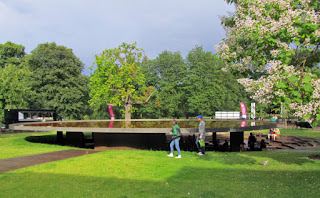 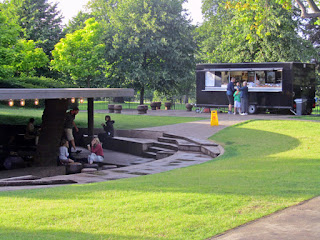 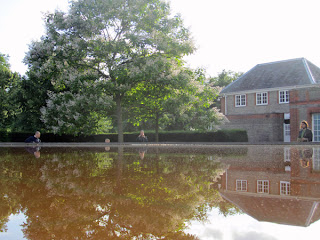 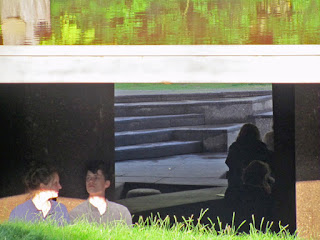 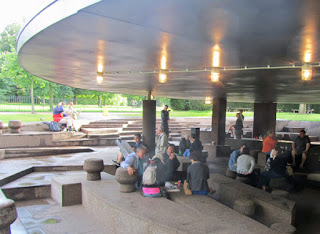 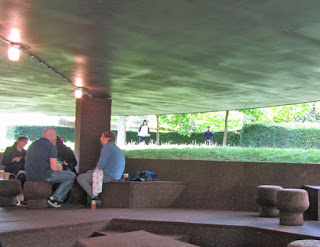 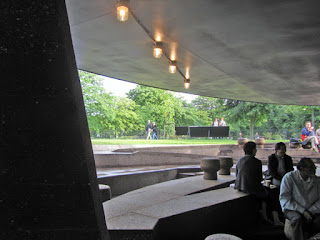 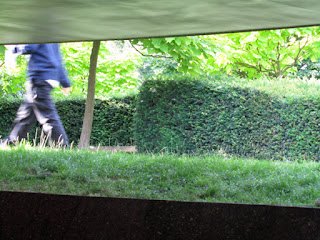 Posted by Simon McCormack at 14:13 No comments: