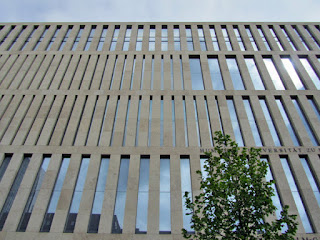 In recent years ‘barcode’ style elevations, featuring rows of random width vertical elevation elements   have become ubiquitous, but Eric Parry, an early and skilful exponent, was criticized by some, who suggested that his design for 30 Finsbury Square (1999-2002) was too derivative of Rafael Moneo’s Murcia Town Hall (1991-1998).  Fashions are quickly taken up by architects and all too soon the novel becomes the commonplace.  Why contemporary architects should be made to feel self conscious about emulating their peers is baffling.  Perhaps this anxiety about originality is a function of a cultural milieu governed by the cult of personality rather than adherence to a philosophy or set of values.  The idea that an innovative approach should be eschewed by others once it has been claimed by one creative genius flies in the face of architectural development throughout history.  At Murcia the stone screen lends sculptural complexity, depth and gravitas to the facade of a municipal building facing an historic square, while in Finsbury Square, the random facade treatment masks homogenous office space, providing variety in the facade of what might otherwise be a bland commercial building.  In both cases, however, it could be argued that the drama is on the surface.


Max Dudler’s Humboldt University Library in Berlin is different again, although superficially in the ‘barcode’ genre, albeit a more restrained interpretation overlaid on a gridded structural frame, arguably it owes more to the through-quality of work by Rationalist architects like Terragni and OM Ungers.  Dudler’s large library building runs parallel to the Friedrichstrasse U-Bahn viaduct, reducing in scale at each end where it abuts the adjacent 19th century buildings.  A large top-lit rectangular reading room with floors stepping down to admit light deep into the building, invokes the highly ordered character of Boullee’s polemical Bibliotheque du Roi (1785).  Surrounded by dense rows of book stacks, the reading room is defined by a regular gridded enclosure faced in timber, but the calmly insistent order found in this space fragments as it reaches the perimeter of the building.

Although the general impression of this building is one of reticence, subtle handling of composition and construction generate a rich and complex effect. While the width of the piers is constant, that of the narrow vertical windows varies.  Unlike the buildings in Murcia and Finsbury Square, windows are grouped together to form larger scale elements in the facade and the grid of the structural frame is detectable.  From the published plans it appears that the narrow windows relate to areas where the book stacks extend to the perimeter of the building.  Refined details include windows with deeper reveals in public areas at street level, window frames recessed into the stone reveals of the piers and carefully judged flush and concave mortar joints between stone panels.  Less successful in this carefully balanced ensemble is the solar control glass, which lacks a crisp reflective surface.  This building exemplifies how the language of architecture is extended and refined by skilled and reflective practice.

Posted by Simon McCormack at 00:41 No comments: 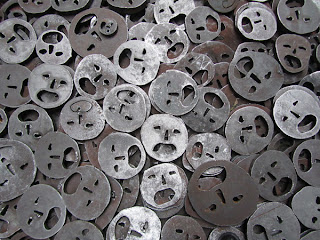 Installation by Menashe Kadishman at the Judisches Museum, Berlin

Discordant clanging reverberates through the Jewish Museum in Berlin, breaking the sombre spell.  The sound comes from ‘Fallen Leaves’, or ‘Shalechet’ in Hebrew, an installation by Israeli artist Menashe Kadishman.  According to Daniel Libeskind, the architect of the extraordinary building, ‘voids’, or tall narrow spaces linking the different levels of the building and generally left free of museum display, are intended to express the absence of Holocaust victims.  It is in one of these spaces that the installation, dedicated to all innocent victims of war and violence, is located.

Faces crudely cut from heavy steel plate, with gaping mouths reminiscent of Eduard Munch’s painting ‘The Scream’, lie in a drift across the floor of the enclosed space.  Like fallen leaves, the sea of faces evokes the cyclical nature of life and perhaps the powerlessness of victims to escape the horror of their fate.  However the temptation to walk through the installation, like walking through leaves, is difficult to resist.  The sensation is exhilarating, but also disconcertingly transgressive – ‘should I be walking on this artwork, disturbing the concentrated quiet of the museum?’  This sense of unease is compounded when you look down and are reminded that you are treading on upturned faces.  Kadishman’s gently provocative installation perfectly complements the distorted architecture of the museum, successfully engaging the visitor in a moment’s intense reflection. 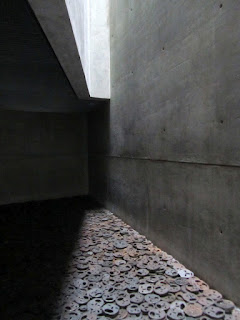 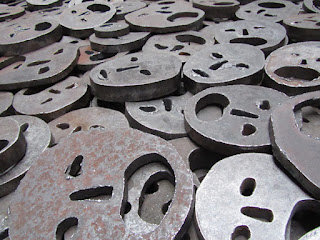 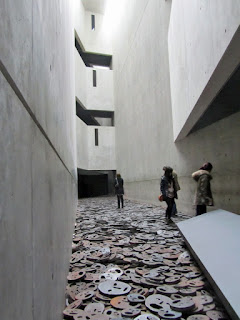 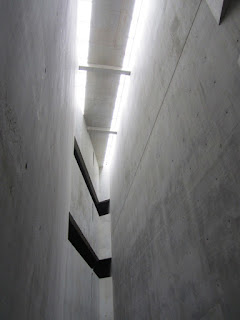 Posted by Simon McCormack at 00:33 No comments: