A preview of two new venues in the Olympic Park - blog posted in June 2012
As part of ‘London Prepares’ I attended track cycling and diving heats at the Velodrome and Aquatics Centre in the Olympic Park, designed by Hopkins  Architects and Zaha Hadid Architects respectively.  With their eye-catching large-span sculptural forms, the buildings might appear to be similar, but they are the products of very different architectural philosophies.    One thing that they do have in common though, is that even in February, they were both sweltering!  The warmth inside the Aquatics Centre is less surprising, but the Velodrome is heated to between 24 and 28 degrees to lower the air resistance and create optimum conditions for breaking records.

Echoing the cambered circuit which it encloses, the precise form of the Velodrome has perimeter glazing at ground level with timber cladding above and sits on raised ground:  it is integrated into the landscape with quiet elegance.  Like a classical stadium, the geometry of the track generates a highly focused architecture that is both dramatic and dynamic.  Spectator seating for 6,000 is split into two sections by an ambulatory at the level of the perimeter glazing.  In legacy mode this allows a smaller number of spectators to be accommodated in the seating next to the track, avoiding a sense of it feeling under-populated.   A steel cable net structure supports the double curve of the Velodrome roof.  By using the steel in tension a 90% saving, equivalent to 1000 tonnes of steel, was made compared with a more conventional structure.  Natural ventilation and roof lights, which allow enough daylight into the track area for practice, make this an energy efficient building. 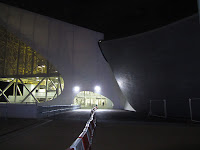 The Aquatics Centre, like the Velodrome, has a striking form, but with a voluptuous whale-like character, an effect reinforced by the ribbed timber cladding.  The heavy steel structure is largely concealed behind the sleek skin of the magnificent roof.  Arranged around the rectangular tanks of the competitive pools are 2,500 permanent seats, with room for 15,000 spectators in flanking temporary stands.  These stands have already been sold and will be relocated after the Games.  Curiously little effort seems to have been invested in their design and they are awkwardly attached to the core building.  On the night that I attended, access for spectators was from under the stand – a wholly unsatisfactory experience.  This casual approach continues where the temporary Stratford City Bridge crashes into the cantilevered north end of the Centre.  As a consequence the bravura flourish of the core building is heavily compromised.

Perhaps swimming and diving will never be able to match the visual thrill of track cycling, with its dynamic circuit, futuristic lycra-clad competitors and risk of collision.  To create a fine building requires incredible skill and tenacity on the part of the architect, qualities which Hadid Architects possess in spades, but it also requires a client with singular qualities: not just a vision, but the will and resources to deliver it.  The outcome for these two projects at the Olympic Park reflects the difficulty of achieving this propitious mix.  If the Velodrome is a better building than the Aquatics centre, it is not because lean is better than voluptuous, but because it has been executed with greater conviction.  However, if the Aquatics Centre fails to deliver the anticipated thrill for two weeks this summer, I have a feeling that we will see the brilliance of Hadid Architects’ design emerge after the Games.

Posted by Simon McCormack at 10:53