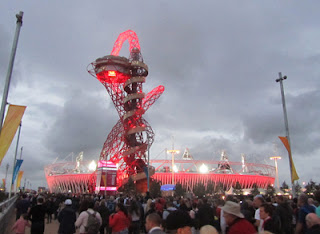 Posted by Simon McCormack at 12:28 No comments: 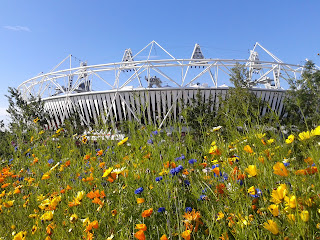 At the halfway point in the 2012 London Olympic Games we can enjoy not only our success in winning medals, but satisfaction in delivering such a major international event with imagination and efficiency. The Olympic Park is a great achievement.   It would be unreasonable to judge a temporary event by normal criteria, but is it possible to create a high quality environment at such a mammoth scale for use over a few weeks?

When I visited the Olympic Park on Monday to attend some preliminary handball matches there was a festival atmosphere.  An unprepossessing entry to the site, approaching from West Ham through steel security gates, is quickly dispelled by a coherent landscape design, with the Athletics Stadium at its centre and bound together by sculpted landforms with generous paths and spectacular swathes of flowering meadow.  A background concern at the Games has been the threat of terrorism and the organisers have done well to restrict visible security to the screening of visitors entering the site.  The atmosphere is relaxed.

Many of the structures are temporary, some built with more panache than others, although this might just be a reflection of different budget constraints.  The hooped surface of Wilkinson Eyre’s Basketball Arena and AEW’s timber framed McDonalds outlets have distinctive identities, but the Water Polo building and temporary spectator stands of the Aquatics Centre appear clumsy.  Many of the buildings are screened off at ground level with fabric covered standard steel barriers.  This is a real pity, especially for the Velodrome and the Orbit tower, both dynamic designs which would otherwise engage well with visitors.  Similarly, there are many tented temporary structures for security checks, food outlets etc.  The experience on the ground is often governed more by these modest elements than the grand gestures of ‘object’ architecture.  Would it have been possible to design screening and secondary accommodation in such a way that it reinforced the refreshingly bold landscape strategy, rather than created a barrier between the buildings and their environs?

Hopkins’s Velodrome* is outstanding, reconciling expressive form with highly sustainable design.  Although Hadid’s Aquatics Centre* is marred by the large temporary spectator stands, in legacy mode this will surely be a beautiful building, even if the heavy sculptural structure is less sustainable than that of  the Velodrome.  The handball matches that we attended were played in Make Architect’s ‘Copper Box’.  This refreshingly unpretentious building is clad in salvaged copper sheet and destined for use as a flexible use community sports venue after the Games.  The Athletics Stadium, Orbit tower and Velodrome are well integrated into the landscape.  Minor criticisms of the temporary configuration will certainly be forgotten as we see the development of Olympic Park into an enduring legacy for the 2012 Games.  *blogpost 28.04.12 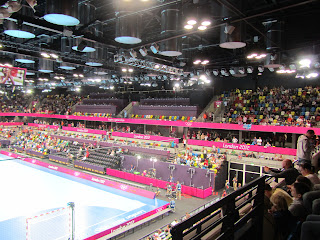 Inside the 'Copper Box'

Posted by Simon McCormack at 09:25 No comments: